Teaching materials on colonialism for secondary levels I and II

The theme of colonialism is introduced, complete with its impact on our lives
today and with background information particularly regarding the colonial history of Germany.

This module is written in British English.

Our teaching materials consist of a comprehensive introductory text, worksheets with tasks and questions, a role model showing options of agency and a project example from Africa. Thanks to the modules, teachers can easily plan lessons regarding the topics.

The modules can be used in various situations. Since they contain further information and links, they help students to research more on the specific topic independently.

But all teaching materials can be used interdisciplinary, too.

Introductory text (excerpt from the module)

To this day the colonial history of Germany and Europe determines our coexistence. The way we speak, our street names, and how we look at the world is characterised by a way of thinking that originated in the colonial period. Colonial thinking patterns and social structures, perhaps in subliminal dimensions, still linger in our thought processes and corporate structures today, leading to marginalization, violence and discrimination. So if you wish to understand the unequal conditions of our everyday life, it is important to look at the colonial past and German colonial history.

The meaning of colonialism

The term “colonialism” is derived from the Latin word colonia, meaning “settlement” or “establishment”. Already in the origin of this word a general attitude to colonialism is visible. It appears that the occupied colonies were previously uninhabited and “uncivilized”. The colonial powers envisioned that they would turn the colonies into a habitable place with culture and history. But of course, this was not the case. The native population had lived on their land for a long time and similarly had exercised traditions and cultural practices for centuries, exactly as the Europeans had done. Colonialism isn’t just
about occupying foreign territories but also about building a worldview of being “more civilized” and “better” than the existing inhabitant groups.

Interests of the colonial powers

Reasons for colonisation differed vastly. An expansion of a colonising country’s own political power was a central aim for the occupation of colonies. Furthermore, the economic exploitation of the regions was in the interest of the colonial powers. The search for new markets and raw materials as well as the distraction from internal political tensions were also reasons for a colonial subjugation of foreign territories. Germany as a colonial power Germany also wished to profit from the wealth of other regions and participated in the European project of colonialism. Even before the official acquisition of colonies in 1884, Germans were active in colonial areas. As a consequence of the industrialisation and the rise of Germany to an economic superpower, German merchants in particular were actively exploiting the local population in other parts of the world. These merchants played a key role in the emergence of German colonies through their trading locations, which were the starting point for colonial occupation. The German colonial empire, consisting of one million square kilometres and twelve million people, was the third largest territory and fifth largest population-wise. A large number of regions were completely or partly under German colonial rule. In addition to the present-day African states of Namibia, Cameroon, Togo, Tanzania, Rwanda, Burundi, Ghana and part of Nigeria, the Pacific states of the Republic of the Marshall Islands, Papua New Guinea, the Republic of Nauru, Western Samoa and the Federated States of Micronesia were also occupied and exploited by the German Empire. These territories were trivially labelled as “Protection areas”. In many locations, the German colonial rulers encountered resistance, to which they responded with armed conflict or even genocide, such as the genocide in Namibia… 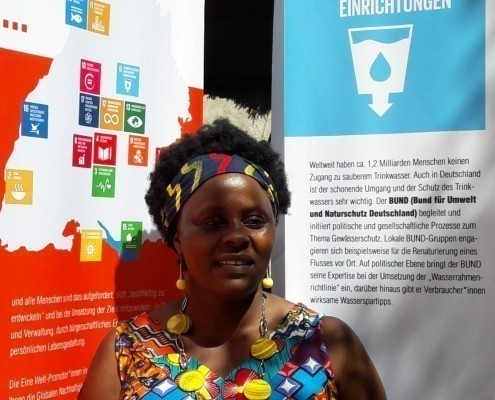